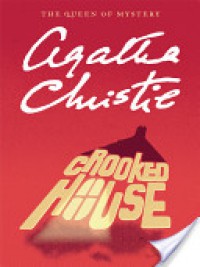 I can see why this was one of Christie's own favorite novels; it is, in the end, as much  about writing a mystery as it is about the mystery itself.

It's also one of the few of her novels where I've had a suspicion about the murderer's identity before it was revealed (I'm normally easy to fool, haha!). I didn't want it to be that particular person, though, which is why my mind kept shying away from it. And that mirrors the family's own preoccupation with the idea that it was important to find out that "the right person" had done it.

The themes of family and heredity were also really fascinating. As much as old Leonides had loved his family and worked to keep them together, it was clearly not what they themselves needed or wanted. Especially with that trait of "ruthlessness" that Sophia often refers to. In the end, the members scatter, hopefully to live more fulfilling lives.

Finally, the fact that the book's narrator was both investigating and about to marry into the family gave the book an interesting feel. The last chapters were unsettling and full of suspense, since it's critically important for Charles not just to have someone charged, but to make sure it's the person who actually did it. After all, it's not a case he's going to be able to walk away from once it's closed.